Welcome to the services schedule and online obituaries for Beresford Funeral Service. Below is a list of recent services scheduled at our funeral home. Click on the name of the individual to read their obituary, death notice, or eulogy. Click on the Condolences/Tributes links to sign an online guest book, or to leave an online tribute to the deceased. If you do not see the name of the individual you are looking for, then try searching our data bases.

It is with great sadness that we share the loss of our dear Patricia Ann Hauglund (Lamoreaux), who passed through the veil to her eternal home on December 24, 2020. Patricia was born October 16, 1956, in St. Anthony, Idaho. She was preceded in death by her beloved parents, Orien and Hazel Lamoreaux, brother Don Lamoreaux, and brother-in-law Jeff Hiram. She is survived by her husband Loren…

Lee Edmon McDuff passed away peacefully on December 22, 2020 surrounded by his devoted wife and family, of whom he was so proud. Lee, the 6th child of Joe E. and Rosa Lee Watson McDuff, was born February 24, 1925 in Ralls, Texas. He graduated from Ralls High School and Texas Tech University Class of 1949 with degrees in Petroleum Engineering and Geology. Lee had a gift, a way of making the…

Stephen Ikemefuna Chukwu was born in Nigeria on March 23, 1958 and passed away in Webster, Texas on December 21, 2020. Services will be held at Beresford Funeral Service on Friday, January 22, 2021 with the visitation starting at 10am and the funeral beginning at 11am.  A graveside service will follow at Houston Memorial Gardens at 1pm. Please check back for an updated obituary.

Ronald Milam McDonnel, age 76, went home to be with the Lord on December 20, 2020. He was born in Minden, LA to Jesse Milam and Geneva McDonnel. He married his childhood sweetheart Mary Jo in 1964. Ron and Mary Jo were blessed with three children, John Mark, Julie, and Rachel. After Mary Jo’s death in 1991, Ron married Margaret who had two grown children, Kielly and Mariah.   Graduating from…

Daniel Mwancha Mwancha was born in Kenya on December 25, 1952 and passed away in Houston, Texas on December 20, 2020. A funeral service will be held on Monday, December 28, 2020 from 10am to 12pm with the graveside service following at Carmen Nelson Bostick Cemetery. Please check back for an updated obituary.

Marco Aurelio Perez, 57, passed away on December 20, 2020 in Houston, Texas.   He was born on November 10, 1963 in Mexico. He is survived by his wife, Gabriela Hernandez de Perez. Funeral Services are scheduled for Tuesday, December 29, 2020 from 1 to 3 pm in the Chapel of Beresford Funeral Service.

Tribute to Nneka Martha TonyAkwuegbu by her Husband: "Nneka Martha Tony Akwuegbu (Nee Olua) Ogbeyialu as I fondly called her was born to the family of late Felix Ibekwe Olua and Ebere Olua on the 24th of May, 1976 in Aba, Abia State, Nigeria.  She attended Zik Avenue Primary School Enugu, and secondary school education at Uwani Secondary School, Enugu. She furthered her studies in Accountancy…

Olga Beatriz Arguello Flores, 78, passed away on December 18, 2020 in Houston, Texas.   She was born on December 26, 1941 in Guayaquil, Ecuador to Ricardo Arguello and Julia Beatriz Flores de Arguello. Olga loved her Lord, Jesus Christ.  She also loved her family. She was a devoted wife, a wonderful mother, grandmother, great-grandmother, and was a good friend to many people.   She is survived…

On Tuesday, December 15, 2020, Hubert “Bud” Santos, of Cleveland, TX, loving husband and father of three, passed away at age 82. Bud was born on February 28, 1938 in Zwolle, LA to Phillip and Christene (Procell) Santos. On January 24, 1959, he married Shirley (Ellis) Santos, his wife of nearly 63 years. Together they raised two daughters, Brenda and Amanda, and a son, Gary. Bud was a talented…

Natalie Fowler Claunch, 92, passed away peacefully on December 14, 2020 at her home in Spring, Texas.          Natalie was born on November 18, 1928 in Corbin, Kentucky, the second of four children.  Her family later moved to Somerset, Kentucky where she graduated from high school in 1946.  She then attended Bowling Green Business University where she received a business and accounting…

Lydia Rodriguez Gloria was born in Calvert, Texas on August 3, 1922 and passed away in Houston, Texas on December 14, 2020. A graveside service will be held on Saturday, December 19, 2020 at Forest Park Lawndale Cemetery at 11am. Please check back for an updated obituary.

Brenda Kay Lawless DeBlance went to be with our Lord, Jesus Christ, on Sunday, December 13, 2020.  Brenda was born on November 2, 1949, to Essell Fred Lawless and Linnie Ruth Garland Lawless in Shreveport, LA.  She is survived by her husband of nearly 48 years, Lynn DeBlance; her daughter Kay Lynn Eck and husband Robert Eck of Mansfield, TX; her daughter Kimberly Ann Davidson and husband Eric…

Albert Joseph Krejci, Jr., 73, went to be with the Lord on Friday, December 11, 2020. A memorial service will be held on Monday, December 21, 2020, at 10 a.m. at Redeemer Community Church located in Katy, Texas. Immediately following, the family will proceed to a private graveside burial. Al was born in St. Louis, Missouri, on March 13, 1947, to Albert Joseph Krejci, Sr. (“Ollie”) and Catherine…

Toni Ruth Alford passed away in Houston, Texas on December 8th, 2020 at the age of 57. Toni was a loving and devoted wife, mother and GiGi. She loved playing with her granddaughters and taking them on endless adventures. She loved surprising them and filling their lives with joy. She loved fishing with family, gardening and traveling. She was an amazing, brilliant, strong and incredible light…

Janet Lynn Murray, 65, passed away on December 8, 2020 in Shenandoah, Texas.   On November 10th, 1955 the world was blessed by the birth of Janet Lynn Eaves. From childhood to adulthood she was a force to be reckoned with. Her parents and siblings have shared stories upon stories of all of her adventures, some mischievous and some inspiring. Her freshman year she met the love of her life on a…

Mary Elizabeth Byrne Michalek, 81, passed away peacefully on December 6, 2020 at her home in Richmond, Texas, surrounded by her family.  She was born on March 22, 1939 in Houston, Texas, to Richard Frank Byrne and Ethel Befeld Byrne. Mary grew up in southeast Houston and attended San Jacinto High School.  She married her childhood sweetheart, James Richard (“Jimmy”) Michalek on July 16, 1956…

Our beloved Rev. Dr. Ernest K. Frimpong has gone home to be with the Father Jehovah in glory. He passed away shortly after midnight on Saturday, December 5th, 2020 after a long battle with prostate cancer. He fought a good fight through faith in his Lord Jesus, first and foremost, as well as applying conventional therapies and alternative natural treatments. He had a peaceful transition into…

Frank Egbert Requena was born on October 28, 1973 to mother Mrs. Sophia Morgan and father Mr. Raymond Requena. He was born in the Cayo District of Belize and lived there for some years then he moved to Punta Gorda Town were he attended St. Peter Claver School, graduated, and then went on to high school which he never finished. Frank had a real passion for hands on work, so after quitting high…

Jeanette Moore was, like many of us, spending life making memories.  She fulfilled her time getting to know her children. She brought smiles and laughter to those who were close to her along the way. She will be missed but never forgotten. She may have left this Earth but the memories of life will never be lost. The memory becomes a part of us in each heartbeat and in every breath.   She was a…

Alina Tollany Rodriguez Cheguez, 23, passed away on November 30, 2020 in Houston, Texas.   she was born in Mexico on August 12, 1997 to Rodolfo Oswaldo Rodriguez and Flor Dalila Cheguez de Rodriguez. Services are scheduled for Saturday, December 5, 2020 at 11:00 AM in the Chapel of Beresford Funeral Service.   Thank you for visiting this memorial web page.  Please check back soon for a more…

Our loved one, Robert Leroy Wells, went home to be with Jesus on November 27, 2020.  He passed away peacefully at home with loved ones by his side. He was born in Muskegon, Michigan to Adrian and Nina Wells on August 8, 1935. He grew up playing and loving the game of football, where he played on a state championship team in 1951. He moved to Kalkaska, Michigan for his senior year of high school…

Michael (Mike) passed away at his home in Houston, Texas on November 15, 2020 at the age of 65.  He was born to John and Elizabeth Kennedy on Feb 15, 1955, the first of 8 children.  He proudly served in the United States Marine Corp in the 1st Battalion at Camp Pendleton as a Marksmanship Instructor and Tank Crewmember from 1977 – 1981.  Michael loved anything to do with trains and the Railroad…

Jeffrey Mitchell Stockstill (Jeff Death), 34, of Dayton, Texas, passed away on November 15, 2020, in Atascosita, Texas. Funeral services will be held at 10:30 Friday, November 20, 2020, at Beresford Funeral Service with Tara Sones, Sister, officiating. Burial will follow at Magnolia Park Cemetery, Dayton, Texas. Arrangements are by Beresford Funeral Service. Due to Covid-19, we are limited on…

Carol passed on Friday November 06, 2020 at the age of 83. After a series of health setbacks later in life that weakened her body she ultimately succumbed to cancer. She remained optimistic and kept her sense of humor through it all. She was born on January 10, 1937 in Jackson, Mississippi. When she was a small child her family relocated to Houston, Tx. She graduated from Aldine High School in… 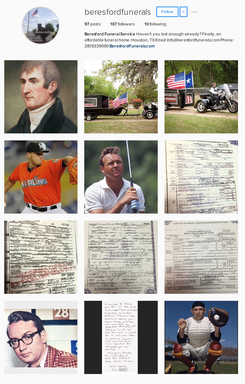